Northwest Fire Systems (NWFS) is your locally owned Full Service, Fire and Life Safety Company. As a Union Level III Fire Sprinkler Contractor we are able to design and install fire sprinkler systems from the underground to the final touches of the trim work. In addition to full design-build capabilities, our service team is ready to test, inspect and repair your fire sprinkler systems, fire pumps, backflow preventers, fire alarm systems, fire extinguishers, kitchen hood systems and gas suppression systems. Through planned maintenance agreements (PMAs), NWFS offers unparalleled service to our clients in the performance of testing and inspections to meet national and local code, sprinkler pipe corrosion management and central station monitoring. We are available for emergency service calls 24 hours a day 7 days a week. NWFS employees carry all required state and industry certifications and have years of service related experience. Our expert attention to your needs ensures the proper operation of your Fire and Life Safety equipment.

Northwest Fire Systems was founded by local individuals who have spent many years in the Fire and Life Safety industry with specific experience in the Seattle market. We have gained a reputation as one of the most professional, responsive and dependable fire companies in the greater Washington area. We are confident that the valuable and broad expertise within our organization can support any of our customer’s needs and expectations.
Northwest Fire Systems is staffed with the best in the industry, and is a member of the NFPA (National Fire Protection Association). We are affiliated with the NFSA (National Fire Sprinkler Association) and the Local 699 Sprinkler Fitters Union. We have employees who have earned NICET (National Institute for Certification in Engineering Technologies) Level II, Level III and Level IV certifications.

1976–Present, Clark completed a 5 year apprenticeship program through local Alaska Union 669 with Grinnell Fire Protection and Automatic Fire. This apprenticeship involved working in and around the oil, lumber, fishing, tourism, and military construction in Alaska. He also has experience in the installation and maintenance of fire alarm panels, card access and security systems.

In 1994, Clark moved to Washington State and continued working for Grinnell Fire Protection which became SimplexGrinnell in January 2000. Starting as a sales representative in 1996 and having received multiple President Award’s, Clark became the Total Service Manager in June of 2001 – 2005. He participated in the Tyco Six Sigma program and completed Black Belt training in January 2006.

In 2006, Clark took over as VP of NW operations for COSCO Fire Protection in Seattle, which involved P&L and operational responsibilities for three NW branches: Portland, Seattle, and Anchorage.

Northwest Fire Systems, LLC, was started in January of 2008.

Ben’s knowledge base coupled with his years of experience gives added value in balancing the relationship between Northwest Fire Systems and our customers. He is responsible for the supervision of all field employees to ensure every job runs smoothly, on time, and are of high quality. He also determines the workforce for size and competence to make sure the right people are in the right places. He works closely with the sales force, the coordinators, building owners, and designers to insure the best on time delivery of service to our customers. He also works closely with the local fire inspectors and fire marshals to insure the jobs are completed per code.

Zeke’s immense knowledge base coupled with his years of experience gives added value in balancing the relationship between Northwest Fire Systems and our customers. He is responsible for the maintenance of two million square feet of fire system–protected property and peripheral equipment. He tests/maintains all water-based fire sprinkler and fire alarm systems while staying ahead of the curve with regard to education. Zeke’s specialties are: fire pumps, standpipes, backflow preventers, fire alarm, fire hydrants, and special hazard foam systems.

J.R. is a firm believer that sales and service must go hand in hand if you truly have your customer’s best interests in mind. Sales drives businesses all around the world, but the businesses that stand the test of time are deeply rooted in providing excellent service to their customers which this belief sets Northwest Fire Systems apart from its competitors.

Deficiencies found at any location are very concerning. Stephani excels with 5 years’ plus experience in the field combined with the several more years working in the office, She brings a great knowledge base to Northwest Fire Systems and her goal after completion of the deficiency repair are equally important and Stephani is here to assist you every step of the way.

Nicole has an extensive background in dispatching and coordinating field crews which has been a great asset in scheduling our inspections in a timely manner. Because of her strengths and love of helping people, Nicole has been a great addition to our team.

Connor was previous a technician turned office admin, with 7 years of field experience. His knowledge about Fire Extinguishers, Hood Systems, Backflows make him a great fit for the office side of Fire and Life Safety Services to handle service crews & emergency calls on a daily basis, ensuring our technicians are able to get to customers in a timely manner.

Kathi is key in the coordination, review, and administration of contractual proposals relating to construction projects. She is vital part of the continued relationship between clients, project managers, and contractors that Northwest Fire Systems have relied upon for our continued success. 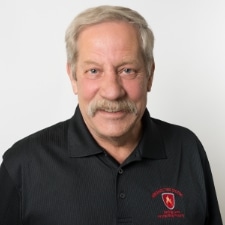 With more than 37 years of experience in the Fire Protection Field, Ken also brings his knowledge of local and national fire codes and ordinances. Adding this with his superior talent in the fields of design, estimating and contract sales, Ken is set to help Northwest Fire Systems become a premier player in the industry.

David began his fire protection career in Alaska starting as an expediter and moving into the Sprinkler fitters Union Local 669 eventually becoming a Journeyman level sprinkler fitter. David did extensive sprinkler work all over the State of Alaska to include oil and gas work as well as private and government projects.

Prior to moving to the Seattle area David spent 2 ½ years working as an Operations Manager in South Florida managing all aspects of the fire protection business. Many of the projects in South Florida were for very high-end customers in the West Palm Beach and Palm Beach Island areas. David also obtained a State of Florida Fire Sprinkler Contractors license.

Franco’s many years as an installer and technician has put his hands-on experience extremely beneficial for Northwest Fire Systems. Franco has brought all that knowledge and expertise in the fire alarm field to the next level to benefit the customer’s needs. We are very excited to have Franco on our team.

David’s knowledge base of designing and selling of small to large fire alarm projects and managing of Northwest Fire Systems fire alarm technicians have added a great advantage to Northwest Fire Systems and all customers. David excels in putting the customers first and knowing the industry to predict the needs of each project. We are proud to have David as part of our amazing team.

Richard has been involved in Design, Project Management, and Estimating of Fire Sprinkler Systems for the last 21 years. He has worked on a large variety of projects from small tenant improvements, various mixed use buildings, high piled warehouse storage, to stadiums such as the Showare Center in Kent, and high rises (8th and Howell and Four Seasons Hotels in Seattle). Richard skills have brought Northwest Fire Systems to a new level of design.

Bryan has worked on big projects: Costco, (McKinney, TX) from ground up and American Airlines Credit Union (Fortworth, TX) from ground up to a bunch of smaller projects from the ground up. He has worked on decent size TI’s (over 100 heads) to 3-4 head TI’s to some residential. Working on all these projects has given Bryan such an extensive background and knowledgebase that he is preparing to get hi N.I.C.E.T. Certified Level II – Water Based Systems Layout to bring more to his already extensive resume.

The following list contains a small part of the satisfied customers Northwest Fire Systems has had the privilege to service over the past 8 years. We are confident that we will add many more to this list in the years to come.

Save by Bundling Your Services

Check out our awesome reviews!